Artemisa Gallery is pleased to announce Cristian Segura: Art Institutions Unveiled. Cristian Segura’s practice lies within the framework of institutional critique. His early interest in art took him to work as a volunteer in museums at 14 years old, to then become coordinator of exhibitions at 19, and shortly after the director of the Museo Municipal de Bellas Artes de Tandil in Buenos Aires at the age of 23. His experience working in a museum motivated him to create work that speaks to the inner workings of museums and cultural institutions with a critical and reflexive eye. Through various media including photography, video, and installation, Segura explores notions of the conservation of artistic histories, the dependence of political and public support, as well as the idea of permanence and perseverance of the arts when a museum becomes a victim of inadequate management or the lack of resources.

In his pierced book sculptures, Cristian Segura shreds, bends, and reworks books edited by Latin American museums, eliminating and muting their content entirely. The artist cuts up the edges of books into small pieces underlining the cultural obligations that art museums have to protect and look after the artistic patrimony that has been entrusted to them through donations and acquisitions. The use of the museum catalogue points directly to this medium as a place of officially sanctioned discourse and part of the mechanism that museum’s employ to legitimize the art itself.

Segura’s ‘Fist’ is a video installation taken from the artist’s performance about the Museo de Arte Carrillo Gil in Mexico D.F. (2012). The video itself exists inside a sculpture of the fist of the artist that connects through a USB cord, allowing this moment in time to be experienced by the spectator.   In this video, the artist energetically throws a sculpture replica of his head in 1:1 scale against the wall of the exhibition space. The head breaks the wall and stays trapped within the hole it ruptures. The museum restores the wall with Segura’s piece inside, leaving the work an element of the museum’s architectural structure. With this work, Segura invites the spectator to understand how museum’s have been able to integrate the critical eye within the institution itself. 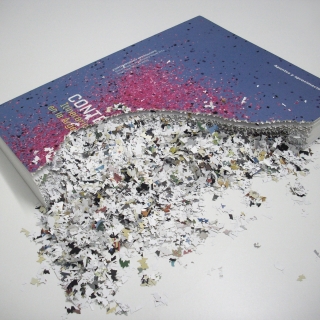