Artemisa Gallery is pleased to announce Field of Action a solo show of work by Argentinian artist Mauro Koliva.

In this exhibition Koliva has produced a new series of meticulous and detailed landscape drawings. Canvas and paper are filled with the artist's expressive trademark gestures to become a stage, or "field of action," as he likes to call it. In these fields organic, mechanic and biomorphic elements become actors in a play from the artist's imagination, and offer a glimpse into his unique internal world filled with teeth, trees, bundles of string, and plumes of smoke. Such lavish and diverse imagery is depicted all at once in Koliva's masterpieces and comes together to create surreal fields that nearly move, surge, and roil in their painstaking craftsmanship. Strange yet familiar forms seem to materialize and come to life as if by magical invocation against monochromatic fields of miniature detail.

Collectively, the drawings present a theme of contradictory images depicting a world of nature and machinery, stillness and movement, the real and imaginary. The result is an overwhelming sense of beauty-taken-too-far that actively counters our natural world. Such a visible notion of excess evokes the slightly dangerous, tense and sinister undercurrent that is prevalent through out Koliva's work, and actively engages his audience to question this state of reality in comparison to that of their own.

Mauro Koliva was born in 1977, in Posadas, Misiones, Argentina. He is licensed in Plastic Arts by the Misiones Art University, and received a grant from the National Endowment for the Arts. Koliva has exhibited his work in a number of international galleries and museums, including a recent show in 2014 at Centro Cultural Recoleta in Buenos Aires, and a show at the Museum of the Americas in Colorado. 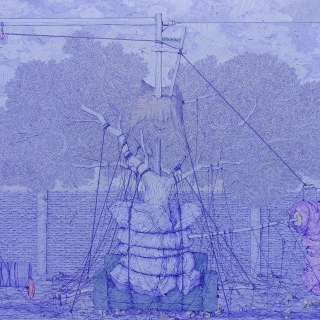