Artemisa Gallery presents The Scribe’s House a site-specific installation by Argentinian artist Pablo Lehmann at Art on Paper New York 2017. The Scribe’s House portrays the imaginary space of a living room inhabited by a writer. In this house, the torn texts of old books drape each crevice and corner of the room, wrapping the walls, floors, and furniture in its entirety. Inside the room, the text and words that exist within the books are much more than content in a space, they are layered, in an almost baroque treatment, to build a physical structure, to shape its form and represent the foundation of the place.

Besides their color and weathered age, there is no criterion in the selection of these books, due to the artist’s primordial search of re-inventing and signifying the texts through mixing their shreds with other books. The majority of the books are not historically significant masterpieces of language; however, the intention is for viewers to create their own texts and interpretations.

This project gives a new function for those yellow, torn, and antiquated books that are no longer used and lie forgotten in old bookstores. The installation seeks to be a renewing place to preserve these out-of-date books, to take them away from their oblivion, giving them the chance come alive and be interpreted in a new context and time. The Scribe’s House invites us to participate; its texts work as a matrix, a cipher to exit our own daily experience and enter an alternative dimension.

Pablo Lehmann was born in 1974 and currently lives and works in Buenos Aires. He has been the subject of solo and group exhibitions internationally at the Black Square Gallery in Miami, Galeria Matthei in Chile, Centro Cultural Recoleta in Buenos Aires, and Casa Ensamble in Bogota amongst others. His work was featured in the Sharjah Calligraphy Biennial at the Sharjah Art Museum (2016) and the Paper Biennial Rijswijk at the Rijswijk Museum, Netherlands (2014). He has been the recipient of numerous awards including the Gran Premio del Salon Nacional and Salon Nacional del Bicentenario. His work is part of several private and institutional collections including the Palais de Glace and Museo Timoteo Navarro, amongst others. 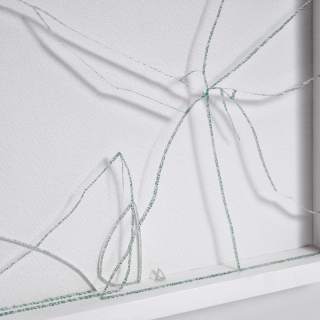