Artemisa Gallery is pleased to announce the gallery’s first solo show “Portrait Kit” with Argentinean artist Julio Alan Lepez. The exhibition will be on view at the gallery from December 11th to January 24th, 2015. The artist will be present at the opening reception and for private viewings until December 16th.

For his debut in New York, Lepez will present a recent body of work in different mediums, where the main character is the human figure. Colorful brushstrokes and excellent drawing skills give shape to Lepez’s characters, which hang from the framework of the picture, run until they get away from it, climb onto it, and sometimes sit on its wooden beams evading the limits of a foundation. The exhibition includes a combination of portraits and self-portraits that reflect Lepez’s thirst to highlight and shape our own contradictions and enigmas. 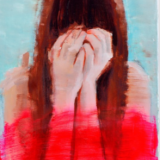